Imagine Alex Salmond declares victory anyway; but the UK government roundly rejects Scottish independence and refuses to negotiate with the Scottish Nationalists on any terms other than as the governing party of Scotland-within-the-United Kingdom.

Imagine extreme nationalists, mainly from within the police and armed forces, then start organising militia, take over government buildings, deport UK officials across the border and set up customs and immigration checkpoints at all major crossings between England and Scotland.

With their Liberal Democrat coalition partners trying to put as much distance between themselves and the Tories as possible in their attempts to stave off electoral annihilation in 2015, imagine the Conservative-dominated government – so unpopular with Scottish voters they have no more than one Tory MP from Scotland at Westminster – then orders the border checkpoints to be retaken – by force, if necessary. Imagine the UK troops meet resistance, shots are exchanged and some UK soldiers killed. Imagine the UK government then orders airstrikes against Scottish militia and the UK army starts shelling areas of Glasgow, Edinburgh and Aberdeen where there are Scottish militia barracks.

Of course, it won’t happen…and it’s not an exact match anyway. For one thing, there’s no third party equivalent of Russia stirring things up and (unofficially) supplying arms to the separatist rebels.

It’s unthinkable that the British army would shell a British city and arbitrarily kill British citizens…but that is exactly what the Ukraine army and airforce have done to Sloviansk and are doing now to Luhansk and Donetsk.

Of course, arguably a majority of those left in Luhansk and Donetsk now consider themselves ‘Russian’, rather than ‘Ukrainian’. But many of them were ‘Ukrainian’ and until recently were not too unhappy to be so. However, it’s hard for your BLUE vMEME to do its duty to your country when your country is destroying your city around you and killing your friends, family and neighbours. Such a scenario encourages PURPLE to ‘other’ into ‘us’ (in-group) and them (out-group) – so the narrative then becomes ‘they’ (Ukrainians) are killing ‘us’ (Russians). 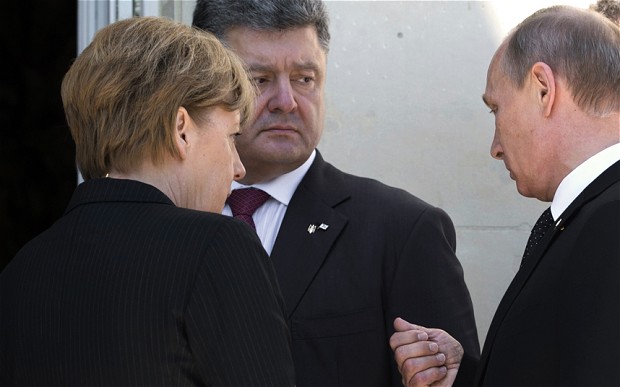 Porsohenko; from hope to disaster
When Pietro Poroshenko was elected president in late May, there was real optimism that this was a pragmatist who would work with practical ideas to resolve the ethnic divisions in eastern Ukraine. He was cited by the likes of CBC Radio’s Anna Maria Tremonti as saying: “As not only the President but the future commander-in-chief of Ukrainian armed forces, I’ll try to do my best to defend Ukrainian people, to bring security and peace.” Even Vladimir Putin, despite the refusal of pro-Russian rebels in the East to credit the election with legitimacy, accepted Poroshenko’s victory and met briefly with him at the D-Day remembrance on 6 June to discuss ideas for a peace plan.

The eventual upshot of that meeting was a 10-day unilateral ceasefire declared by government forces, with hopes (later met) that the self-declared Donetsk and Luhansk ‘people’s republics’ would give reciprocal recognition of the ceasefire. Meanwhile, a contact group of Ukrainian, Russian, French and German negotiators attempted to set down the pre-conditions for serious discussions to resolve the conflicts in eastern Ukraine.

The talks and the ceasefire ended with Poroshenko’s televised declaration that: “We will attack and liberate our land. Not renewing the ceasefire is our response to terrorists, rebels, looters.”

After initial assaults as shaky and ineffective as those pre-ceasefire, the Ukrainian army campaign has gathered momentum, seizing Sloviansk in early July. However, the army has increasingly shelled into urban areas in Luhansk and Donetsk, while the airforce have reportedly used unguided missiles against rebel units embedded into residential areas. Consequently there has been a dramatically rising number of civilian casualties. Just how many is difficult to ascertain because, of course, the rebels want to maximise the figures for their propaganda while the Government want to minimise them for their propaganda.

It would seem a RED/BLUE zealotry is driving Poroshenko and his senior colleagues to order the increasingly efficient and ruthless killing machines of the army and airforce to defeat the rebels at all costs to the local citizenry. As the Ukrainian military becomes more efficient, so its BLUE also renders it more likely to blind obedience with no heed to the human cost of their obedience.

The real indicator that Poroshenko’s ruthlessness was overcoming his pragmatism was his decision to sanction Ukrainian army offensives against the rebels in towns around the crash site of MH17, thus preventing crash investigators accessing it. A Daily Telegraph report implies that Poroshenko paid lip service to Dutch prime minister Mark Rutte’s demand that fighting stop near the crash site while Ukrainian troops in fact pressed their campaign with even greater ferocity.

The tragic destruction of MH17 should have given peace in eastern Ukraine a renewed impetus. I proposed in Hope from the Tragedy of MH17 that there may be indications of ultra-nationalist forces in Russia supporting the rebels and supplying materiel to them in in at least partial contradiction of Putin’s wishes. If so, MH17 should have given the Russian leader the means to reign in the ultra-nationalists whose (presumably-mistaken) shooting-down of the airliner had turned much of world opinion against them and against Russia, their perceived controller.

In what can only be seen as a mark of his cunning, Putin and his wily foreign minister Sergei Lavrov have now confounded the apparent demise of the rebels by turning the United Nation’s concern for Luhansk and Donetsk into a propaganda issue. The UN had expressed real concern for the worsening humanitarian situation in Luhansk and Donetsk, with secretary general Ban Ki-moon widely reported – eg: Rianovosti – to have said: “Innocent civilians trapped in the fighting continue to lose their lives….restoring vital infrastructure, not least for water and sanitation, is essential for a return to normal life…the number of those who are fleeing the area continues to grow.” The Russian response was Lavrov’s proposal for a giant convoy of Russian trucks to bring aid to the rebel-held cities. 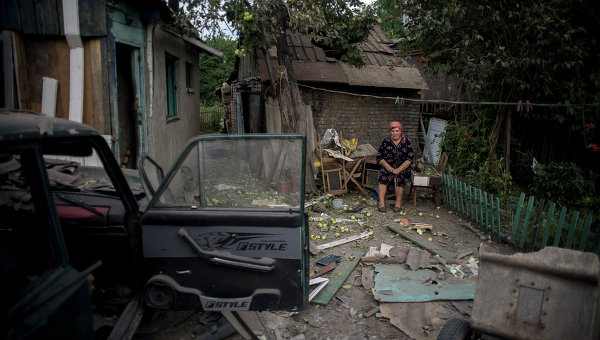 A old woman sits in the ruins of her area of Luhansk. Copyright © 2014 Rianovosti

As I write, these 270 trucks (clearly military but painted white) sit just inside the Russian border, waiting to be inspected by the Ukrainians (looking for military supplies) and escorted by the Red Cross under conditions which have taken days to be agreed. According to BBC News’ Steve Rosenberg, many of the trucks opened up to journalists are half-empty. It’s almost a piece of bizarre theatre. What exactly are Putin and Lavrov trying to do? One thing for sure is it puts the plight of the ethnic Russians in Luhansk, Donetsk, etc, very squarely in the public eye and puts the Ukrainian government in the frame for having caused their plight. It also makes the Ukrainians look callous and intransigent, blocking an aid convoy – especially after the Americans went public on accepting Lavrov’s assurances that the convoy had no military purpose. And, of course, the whole convoy concept enables Putin to continue to pose for his domestic audiences as the great champion of ethnic Russians in the post-Soviet diaspora.

With regard to the Russian armoured personnel carriers alleged to have crossed the border on Friday, as NATO secretary general Fogh Rasmussen says: “We see a continuous flow of weapons and fighters from Russia into eastern Ukraine…”

By attacking the rebels so ferociously, causing notable civilian loss of life, Poroshenko has actually strengthened the Russian ultra-nationalists’ hand. When Putin had the means to reign them in over the MH17 tragedy, Poroshenko has given them the means to force Putin into at least tacit support because their brother ethnic Russians are being killed in what can so easily be portrayed as a racist onslaught.

What is Poroshenko’s vision for eastern Ukraine?
It might be wondered if Poroshenko and his colleagues even have ethnic cleansing in mind. Destroying or driving out ethnic Russians would certainly solve the eastern Ukraine conflict in the short term.

According to Rianovosti, the Russian authorities and UNHCR are reporting that 740,000 Ukrainians have crossed into Russia since the start of the conflict, with 60,000 of them applying for refugee status and a further 115,950 applying for other forms of legal stay. However, that leaves nearly two-thirds as presumably not applying to stay in Russia and, therefore, possibly intending to return to their homes in eastern Ukraine at some point.

If Poroshenko is high in the temperamental dimension of Psychoticism, the unflinching ruthlessness of ethnic cleansing would not be beyond him.

Assuming that the Government doesn’t want to – or couldn’t – enact ethnic cleansing in eastern Ukraine, just what is Poroshenko’s end game? If indeed he has one.

The destruction and the loss of life will be remembered for decades, if not centuries. That’s the way the PURPLE vMEME builds up it sense of tribal identity, with stories of victories, defeats and persecutions – a narrative that binds the people together in their common but unique tribal history. This increases their sense of in-group ‘us’ and ‘others’ those not-of-our-tribe as out-group ‘them’. Thus, ethnic Russians, who were mostly content to live side by side with ethnic Ukrainians, will now most likely see them as ‘others’ not to be trusted.

It goes the other way, of course, many Ukrainians will now label ethnic Russians as ‘fifth columnists’ only too ready to serve Moscow rather than Kiev.

So, assuming the Russians don’t invade and the rebels are defeated sometime in the not too distant future, how does Poroshenko intend to bring peace and reconciliation to eastern Ukraine? Indeed, how can he be a democratic president to people he seemed willing to destroy to achieve his ends?

As he has acted since the end of the June ceasefire, Poroshenko appears to be a RED/BLUE zealot who will stop at little or nothing to achieve his cause.

However, it must be remembered he is also a highly-successful businessman; a billionaire. That implies ORANGE has had a big hand in dominating his selfplex at times in the past. Certainly the pragmatic tendencies he initially displayed after his election victory were indicative of ORANGE at work. If so, then we can but hope that ORANGE and higher will emerge to dominate his thinking again as he hopefully engages with how to rebuild citizenship and peaceful coexistence in eastern Ukraine.

To do that, he’s going to have to reach accord with Putin and the Russians.

What he needs to do now – immediately! – is to stop making things worse than they already are. That is just ‘madness’!

Israeli Stupidity in Gaza! #2 Why Scotland and rUK need Each Other