You might have missed it in all the intense media coverage of Margaret Thatcher’s death this Monday but 5 FEMEN activists sure upset Vladimir Putin on his visit with Angela Merkel to an industrial fair in Hanover. With “Fuck you, dictator!” scrawled across their bare breasts, they chanted the same slogan as they rushed at him – only to be bundled away by the security men. Although he claimed afterwards to have been amused by the protest, according to the leader of the protest, Inna Shevchenko, writing in The Guardian 2 days later, the Russian president was furious and demanded the Germans prosecute the protestors.

What a great excuse FEMEN provide to feature a picture of an attractive woman with bare breasts on my Blog – all in the name of serious sociopsychological commentary! What a great excuse for the tabloids – including those who have supposedly turned their back on Page 3 girls – to include pictures of pretty topless women in their news pages! 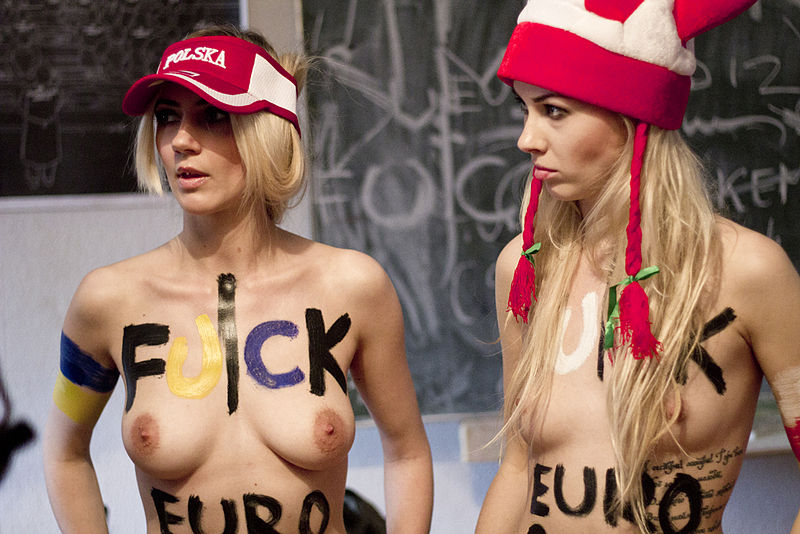 FEMEN, the radical Feminist group who have staged topless protests at key events, including a mass by Pope Benedict in November 2011, Euro 2012 and the London Olympics, have certainly gained considerable coverage in the media through their stripping-off antics – and that has resulted in a significant expansion of their movement. From their founding in Kiev in 2008 to protest against sex tourism in the Ukraine, they now have ‘representatives’ in virtually all European countries and, interestingly, a sizeable presence in South America. On the face of it, FEMEN are a tit man’s dream: a bunch of attractive women who believe the best way to make political protest is to go topless in front of the cameras. FEMEN activist Galina Sozanskaya told Russia Today (2009): “But we understand that this is the only way to be heard in this country. If we staged simple protests with banners, then our claims would not have been noticed.”

Sozanskaya is almost certainly right. A mixed age-and-mixed shape range of female protestors dressed in regular clothing is nothing like a s newsworthy as a bunch of young hotties baring their breasts. In terms of Richard Petty & John Cacioppo’s Elaboration Likelihood Model (1981), if the audience aren’t going to be persuaded by the message itself (the central route), then dress the delivery of the message up in the most attractive way possible (the peripheral route).

In Gravesian terms, FEMEN’s vMEME harmonic of RED/GREEN is exploiting the media’s ORANGE-driven obsession with sales – and attractive girls in a relative state of undress help sell newspapers, cars, chocolate bars, shampoos and any number of consumer items. Male fascination with ‘tits-and-ass’, it can be argued, is an adaptive response, with these aspects of the female shape providing visual cues to a woman’s fertility. So men exploit other men – the majority of senior decision-makers in the commercial media are still men – to make money by using naked and semi-naked women. The ORANGE vMEME exploiting the BEIGE vMEME. Only now FEMEN women are, in their own eyes at least, hijacking and exploiting that exploitation to advance Feminist causes.

We exploit you exploiting us. 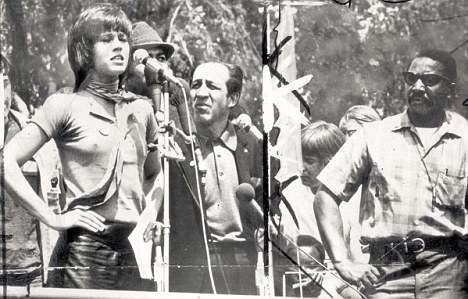 The Women’s Libbers forerunners
In many ways the braless ‘women’s libbers’ of the late 1960s and early 1970s were the forerunners of FEMEN. In an effort to undermine male determination of what the female shape should look like, many young women took off the corsets and disposed of their bras. What this gave the ORANGE-driven media, of course, was lots of photo opportunities of bouncing boobs and erect nipples to help sell newspapers and magazines.

But did some of the protestors use their bouncing boobs to advance their own cause in a similar RED/GREEN way to FEMEN and their bare breasts? Certainly renowned actress Jane Fonda, then in her radical phase, has claimed that she and other female protestors often went braless at demonstrations to distract police and soldiers (Patrica Bosworth, 2011).

Did such tactics work? Well, certainly Jane’s nipples got her and her views a lot of press coverage…but much of it uncomplimentary; women’s corsets were consigned to the trash can of history but the bras never really stayed off for very long; the American military got out of Vietnam as soon as they decently could and women in the Western world began to make careers in the workplace – though the pace was slow and arduous. Graham Snowdon (2011) reports that 73% of women surveyed in the UK feel there are still ‘glass ceiling’ barriers to their progress up the corporate ladder. And, according to Rosemary Crompton & Clare Lyonette (2008), women still do far more housework than men in the UK.

How much the protests of the braless women’s libbers really contributed to the changes in the economic and social status of women in the late 20th Century is impossible to assess with any degree of accuracy. Certainly, they were a contributing factor within the wider Feminist movement…but it was probably relatively minor in the overall scheme of things. As for the media of the time, most of it treated the braless women’s libbers as a welcome novelty at best.

FEMEN and the novelty burden
FEMEN have got the same level of challenge as their women’s lib forerunners. In a world where many men  just love ogling boobs, baring your breasts as a form of protests risks being no more than a ‘welcome novelty’. Certainly, the tactic at least gets you media coverage, to go back to Sozanskaya’s statement; but will the tactic ever amount to more than a ‘welcome novelty’?

After the Putin protest, Shevchenko told BBC Radio 4’s Today programme: “You can see the reaction of security and police. It’s just a naked breast. It’s just something you can see in advertisements, but it’s really scared them.” The officials might have deemed Shevchenko’s boobs highly inappropriate for the Hanover trade fair but that didn’t stop them being posted on the internet and appearing in newspapers…being sold and resold for novelty value and possibly even arousal.

Is Shevchenko deluding herself with this ‘threat of the breast’ talk? Looking at the video, it may be the way she and her colleagues ran at the Putin-Merkel entourage, screaming like demented harpies and fighting with the security men, that caused the scare rather than some bouncing boobs!

This near assault may represent an increase in extreme behaviour as a result of frustration in trying to get beyond the ‘welcome novelty’ factor. After all, the original FEMEN protestors on Kiev’s Independence Square in 2008 wore bikinis and got a little attention; then one of them went topless…. 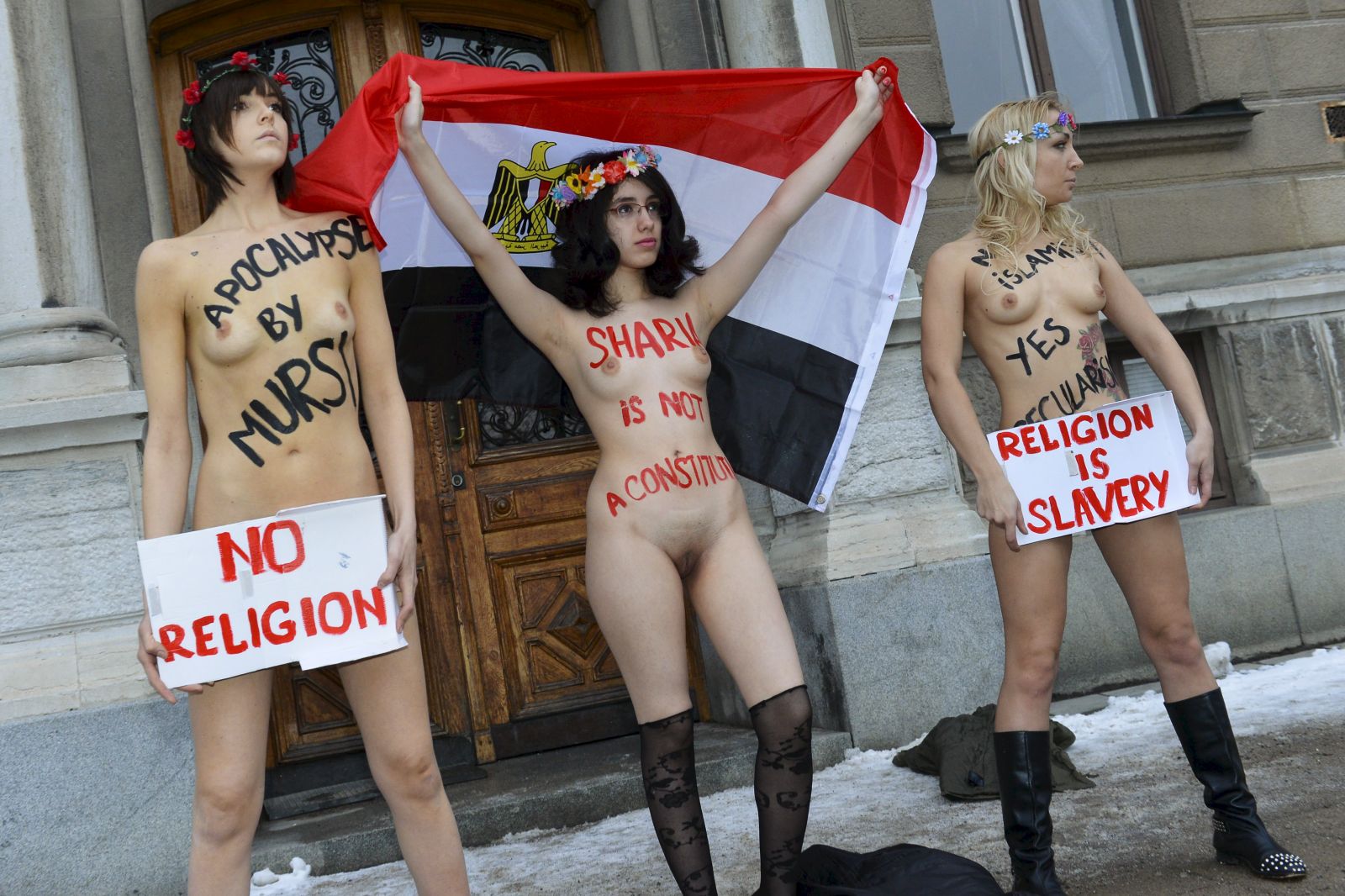 Aliaa Elmahdy bares all with FEMEN in Paris

In December last year Aliaa Elmahdy led a FEMEN demonstration outside the Egyptian Embassy in Paris in which she went completely naked, a portent perhaps of what is to come in term of nudity at FEMEN events…? Bare breasts are common enough – on TV and Spanish beaches – to have little threat value for most people but vaginas on view in the high street may be a completely different level of visual challenge. 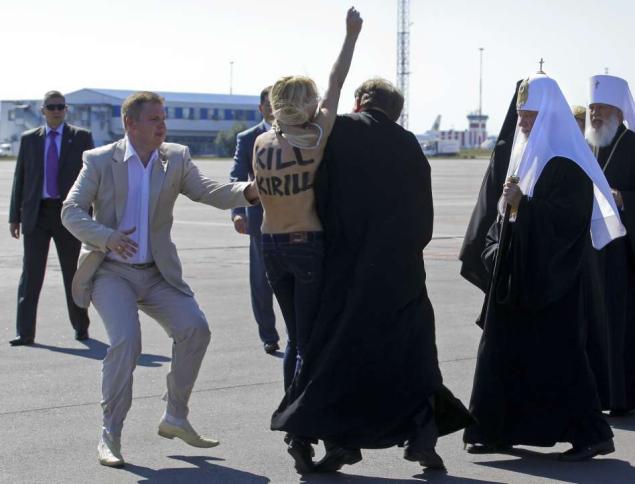 Yana Zhdanova attacking the head of the Russian Orthodox Church 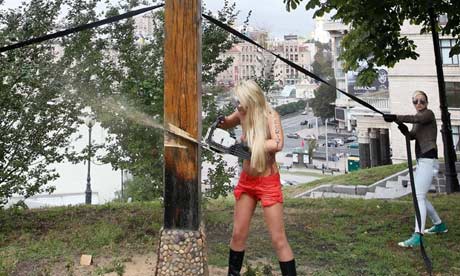 Perhaps more worryingly, there are indicators that the low-level violence at the Putin protest may not be an isolated exception but part of a campaign. In July last year FEMEN’s Yana Zhdanova attacked  Kirill, the head of the Russian Orthodox Church, with ‘Kill Kirill’ daubed on her back. In August Shevencko herself used a chainsaw to bring down a wooden cross in Kiev which had been erected in memorial of 700 people killed there in November 1941 by the regime of Josef Stalin.

It’s a common enough theme in Sociology and Psychology that, when people can’t get what they want through approved means, their RED leads them to use non-approved means – Robert K Merton’s (1938) version of anomie. Thus, there is a real risk of FEMEN resorting to ever-more extreme means to pursue their goals, the more they are treated as a ‘welcome novelty’.

Part of the problem in developing strategies to deal with FEMEN is that their goals are so wide. Like al-Qaeda’s anti-everything Western stance, their aims are more broad than specific; and, like al-Qaeda, they are a distributed rather than a centralised organisation.  A many-headed Hydra. Of course, there’s no indication FEMEN have killed anyone yet nor that they intend to…but these extracts from Shevencko’s rant in The Guardian are as chilling as they are unfocussed:-

“Make no mistake about it: we are at war. This is an ideological war, a war of traditionalism against modernity, oppression against freedom, dictatorship against the right to free expression. We are targeting the three principle manifestations of patriarchy: religion, the sex industry, and dictatorship….Femen is a huge experiment. Every day we find new ways to destroy the patriarchy, new words with which to answer our opponents. We are calling for a global sexual revolt against the system. We cannot tell you of our upcoming plans, or what the final result of our struggle will be, but we’re working on them around the clock. The only thing I can say for sure to all those against whom we are fighting is that we are not about to let you enshrine such shit as yourselves in a cult.”

For the time being, like many men, I’ll continue to enjoy the periodic displays of bare boobs. I won’t be surprised if FEMEN eventually just wither away, another half-baked novelty tactic for getting attention overtaken by the need to earn money and raise kids. Equally I won’t be surprised either if FEMEN don’t come up with some genuinely nasty – and perhaps even bloody – surprises in the not-too-distant future.