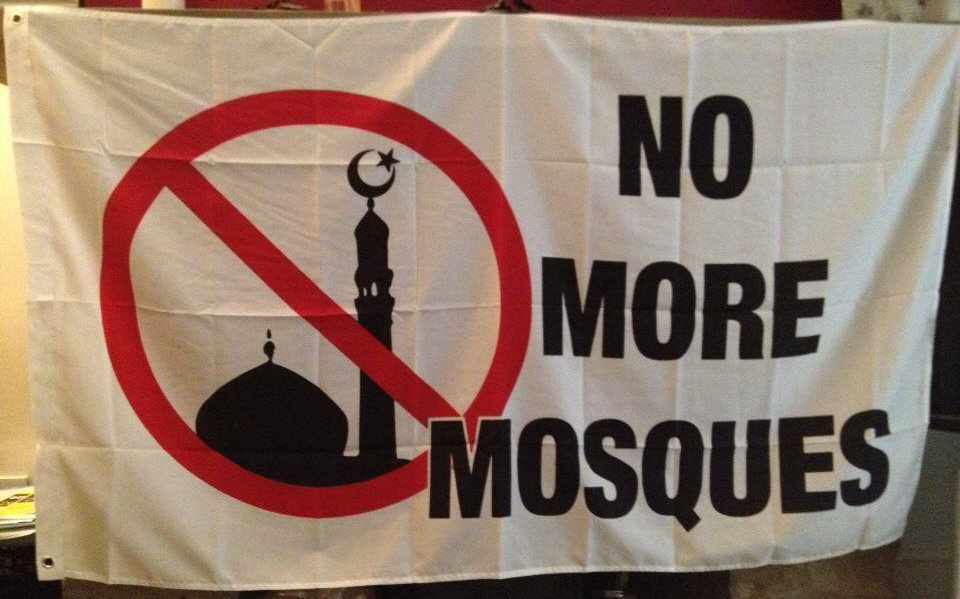 On a walk this morning I was surprised to see a National Front (NF) sticker on a post box proclaiming ‘No more mosques!’ (The design was identical to the flag above .)

Firstly I didn’t even know the National Front were still going – I thought they were long ago eclipsed by the British National Party (BNP). Apparently the NF are still in some kind of business – though they seem to be riven by the most egomaniacal RED-driven in-fighting! Check out http://www.national-front.org.uk/ to view their sorry state.

Secondly I was surprised to see the sticker in the Greengates part of Bradford, close to where I live. While there was some trouble in the area at the time of the 2001 ‘race riots’, Greengates appears to have little or no racial tension.  It is a largely mixed area of lower middle class and upper working class. The population appears to be mostly white – though there are a number of Asians living in and around the area – as evidenced by the wide array of clothing and skin colours to be seen in the Greengates Sainsbury’s.  Everything from shorts and vests to shalwar kameez and even full burkas can be found in the supermarket aisles in the Summer!

It’s not as though Greengates is like Scholemoor, a deprived sink estate where the white working class majority have been in a state of high tension with Asian ‘incomers’ for decades and now both communities feel  threatened by an influx of Slovakian and Slovakian-Roma families (Jenny Pearce & Elisabeth-Jane Milne, 2010).

So why this lone sticker should appear in Greengates now is a mystery.

Bradford: ethnic conflict or religious collaboration?
Nonetheless, it’s a potent reminder that racial, ethnic and religious tensions do exist – if not in my immediate area of Bradford, then certainly in other parts of the city.

Only 2 years ago Lord Ouseley, who led a government review of race relations at the time of Bradford’s 2001 riots, reputedly told the Yorkshire Post’s Joe Shute that the “‘tinderbox conditions’ that sparked the violence still exist today, despite hundreds of millions of pounds poured into city regeneration.” Ouseley subsequently told Kathryn Bradley of Bradford’s Telegraph & Argus that he had been misquoted. However, he did tell Bradley: “The information I have about Bradford now is all anecdotal. I am not in a position to be able to comment in any detail.  I have made it clear to anyone who I speak to I have not been back to Bradford to do analysis on a point by point basis but I do hear from people in Bradford who phone me up.” In those words, there is a clear implication that he does hear about racial tensions but is not able to quantify the information.

But even if it is only a small handful who are moaning to Ouseley about the ‘others’, a minority can have a powerful influence. So they do need to be taken into account.

It’s also a mistake, usually coming from the GREEN vMEME, to assume that, because there is no overt conflict between communities, then there is no underlying tension.

Simply by its drive to find safety in belonging, PURPLE predicates tribalism. It needs to know who belongs to its tribe or in-group and who doesn’t belong to its tribe or is in the outgroup. This differentiation, then, is natural to PURPLE. GREEN can use BLUE’s laws to legislate against forms of differentiation such as racism or religious hatred but it can’t control PURPLE facilitating prejudicial thoughts inside someone’s head. Wherever PURPLE tribalism is suppressed, like weeds finding their way through concrete, it eventually emerges to wreak havoc on the order BLUE government has supposedly got in place. Recent examples include the break-up of the Soviet Union and Yugoslavia along ethnic lines in the 1990s. Even the current turmoil in Iraq and Syria involves considerable sectarian forces.

Even the desire of some Scots to break Scotland away from the United Kingdom has PURPLE tribal/ethnic/sectarian elements to it.

Given that tribalism, especially if exploited by a RED-driven demagogue, all too often becomes violent against the out-group, it’s perhaps a measure of British success that the forecasts of large-scale ethnic violence predicted in the early days of the recession – see: Should the BNP appear on the Beeb? – haven’t come to pass. In a country where government spending on benefits and public services continues to be cut, where good jobs are in short supply and where living standards are declining at an alarming rate, it’s quite remarkable that widespread ethnic scapegoating is not catching on.

Maybe it’s something in the nature of British society? Maybe it’s the effects of grassroots community leaders who can think big enough to see the interests of all and, for the most part, keep the would-be extremists in check? Maybe it’s a bit of both. Certainly PURPLE’s natural default position of tribalism is being managed. As Eva Telzer et al (2012) has shown – see: Is Racism Natural…? – amygadala fear reactions are reduced when familiarity and comfort are achieved with those whom once you might be frightened of. In such situations, PURPLE doesn’t need to belong quite so intently to its own in-group because it’s not so frightened for its safety.

While researching for this Blog post, I came across the quite remarkable story from earlier this year of how the Bradford Council of Mosques had raised thousands of pounds to help the Bradford Reform Synagogue repair its building so it was fit for worship. ….er, hang on, isn’t the stereotype one of Jews and Muslims hating each other to the point of destruction? 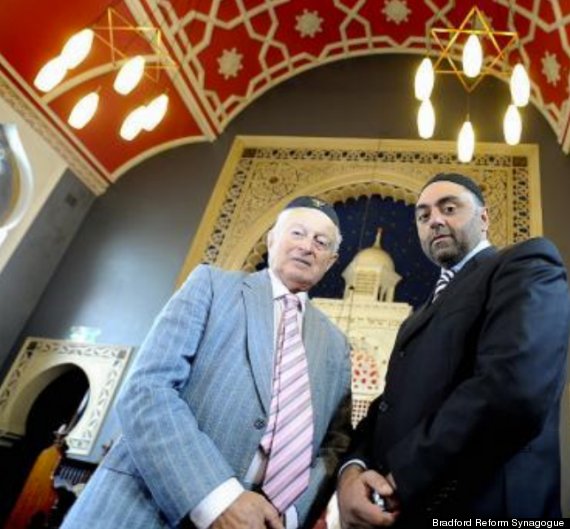 Zulfi Karim, secretary of the Bradford Council of Mosques, reveals undoubtedly big picture thinking in his comments on these actions to the Huffington Post’s Jessica Elgot: “There’s been a Jewish community in Bradford for 100 years, and now there’s barely a trace. I was so impressed by the architecture and the history of the synagogue, we couldn’t let this go to waste. Many people do seem to be massively taken aback that the Jewish and Muslim community are working hand-in-hand, when all you seem to hear about Bradford are the nasty things. We want to make sure this synagogue is protected, long-term, a heritage site for the whole community.”

Zulfi Karim certainly sounds like a 2nd Tier thinker to me!

No wonder George Galloway, Respect MP for Bradford West and one to exploit every opportunity to raise his profile, had the gesture recorded in House of Commons Early Day Motion 1149: “That this House congratulates Zulfikar Karim, the General Secretary of the Bradford Council of Mosques, the Bradford Council of Mosques Management Committee and the members of the Bradford Muslim community for their extraordinary ecumenical gesture in raising a very large sum of money to repair the roof of Bradford’s last remaining synagogue, thereby enabling members of the Jewish community to continue to worship there; and believes that this generous gesture shows the true spirit of Islam towards other People of the Book.”

The need for national leadership
If local leaders, like Zulfi Karim, are able to make handsome cross-faith gestures without losing anything of their own sense of ethnic/religious identity, what are our national leaders doing?

The answer would appear to be little or nothing.

As I pointed out in the Society feature, Islamification: Britain’s Challenge, ethnic Asian Muslims are the fastest-growing section of the UK population – though probably not as fast as some of the ‘Eurabia’ fantasists fear! As second, third and fourth generation Britons, they have all the rights and responsibilities in law that ethnic white neo-Christians have. Some of the values devout Muslims would want on the national agenda – eg: restrictions on access to pornography – would most likely be supported by a majority of whites. Other values, such as the disenfranchisement of homosexuals – see: What will Islam do for Homosexuals? – are rather more tricky.

National politicians and social strategists need to start planning for how to deal with such issues NOW.

While the white neo-Christian majority must be kept feeling secure in their own land – these ‘ancestral lands’ as BNP supporter Man of the Woods once described them to me – we also have to accept that we have a sizeable and growing minority who have some different values – in some cases, very different values! Not only will they become increasingly important electorally, with politicians courting their vote…but, if we don’t engage them  in the political democratic process – particularly their young men – then we risk them being radicalised to an al-Qaeda-type approach by the small number of more radical imams.

To simply say ‘No more mosques!’ as the mystery NF member did with his sticker on a Greengates post box is a nonsense. It goes against all concepts of Human Rights to stop people worshipping God in their own way – as long as their way doesn’t impede the rights of others to worship God in their way.

Thus, Sharia is incompatible with English Law and, as far as I understand it, Scottish Law. However, if some Muslims wish to submit themselves to Sharia courts as some Jews submit themselves to the Beth Din, then that would be their choice. However, just as  Jews can abandon the Beth Din at any stage of a proceeding and resort to English Law, then so should Muslims be able to abandon Sharia if they are unhappy with the proceeding. The national law of the country must always be the greater authority if there is not to be a religious hegemony.

So there needs to be negotiation, compromise, collaboration and, perhaps most of all, vision. What will Britain be like in 50 years when perhaps 40% of the population are not white neo-Christian and perhaps 30% are Muslim and perhaps 25% are Asian Muslim?

As a country we need our leaders to explore these issues, frame objectives and develop strategies to achieve those objectives for the greater good and maximum harmony.

I accept that change is inevitable – that the white neo-Christian country of the Ealing films of the 1950s – if it ever existed exactly as they made it out to be – is gone. We have what we have: which is a country struggling to come to terms both with how to become a multi-ethnic, post-white neo-Christian society and with how to curtail extremism on all sides.

At a local grassroots level, judging by stories like the Bradford Jewish-Muslim collaboration, we’re not doing too bad a job if it. Now, if only the national leaders could show some 2nd Tier thinking….