Martin McGuinness, the deputy first minister of Northern Ireland, always good for a soundbite, is certainly making some interesting news stories these days.His effective admission yesterday (3 October) that the Provisional IRA did commit murder when innocent people died as a result of their activities is another – major? – step forward in Northern Ireland’s unsteady and decidedly volatile route to a lasting peace. McGuinness told The Independent: “The IRA were involved in quite a number of incidents which resulted in the accidental killing of innocent people and the term used by the relatives of those people who were killed was that they were murdered. I wouldn’t disagree with that. I’m not going to disagree with their analysis of what happened to their loved ones…. I accept that, in the circumstances where innocent people lost their lives, then it’s quite legitimate for the term murder to be used.”

Of course, McGuinness maintains that the army and police personnel and Unionist paramilitaries blown up or gunned down by the IRA were legitimate targets in a ‘bitter war’ – to say anything other would be to disrespect both his own past and the hundreds of IRA members who died or served jail sentences for their cause. Much as his ORANGE ambition is driving him in his quest for the Irish presidency, his PURPLE loyalties and BLUE devotion to the cause will not let him go that far.

Nonetheless, at a rally at Free Derry Corner a few days earlier (29 September), the deputy first minister, after telling a crowd of some 2,000 that his heart went out to all those who lost loved ones as a result of the conflict, added: “I am also conscious of many British soldiers, members of the Royal Ulster Constabulary, members of the Ulster Defence Regiment, and my heart goes out to all their relatives.”

It’s easy to dismiss his remarks as the kind of crass manipulation typical of the ORANGE vMEME. McGuinness, however, claims the remarks were genuine and unscripted. If so, then maybe there’s some 2nd Tier thinking emerging in McGuinness’ head if he can genuinely empathise with the former enemy…?

McGuinness the reconciler?
As  he gets serious about his campaign to become the Republic’s president, McGuinness is presenting himself more and more as a peacemaker, someone able to bring reconciliation to the still-divided peoples of Northern Ireland.

Certainly the close working relationship he formed with the once-hated Ian Paisley in Northern Ireland’s power-sharing government of 2007 – they were lampooned as ‘The Chuckle Brothers’ by some of those close to them! – is an indicator of how much McGuinness wanted  the devolved government of the province to work. When Paisley’s successor as  first minister, Peter Robinson, had his career rocked by very public marital problems, McGuiness was one of the first to offer personal support.

McGuinness  has even reached into the thorny realms of the religious schisms fuelling much  of the suspicion, distrust and outright contempt between Catholic Republicans and Protestant Unionists. 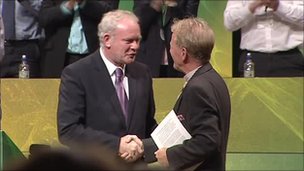 This  September he got the Reverend David  Latimer of the First Derry Presbyterian Church to be a guest speaker at Sinn  Fein’s ard fheis (annual conference)  in Belfast’s Waterfront Hall. It was a ground-breaking event on 2 accounts. Firstly, it is the first time Sinn Fein’s ard  fheis has been held north of the Irish border. Secondly, it is the first  time a Protestant clergyman has been a key note speaker at the ard fheis. McGuinness told the ard fheis: “In my experience of recent years, many within the Unionist  community are up for a journey of reconciliation and dialogue.” Latimer  referred to McGuinness as his ‘brother’ on that journey.

Both  the bravery of the move and the complexity of the issues involved are reflected in the vociferous criticisms of Jim  Allister, MLA for North Antrim and leader of the Traditional Unionist Voice. He called Latimer a ‘latter day Lundy’. (Robert Lundy was the Governor of Derry in 1688 who tried to persuade his Protestant ‘Orange’ forces that resistance to the Catholic Jacobites was  useless – acts portrayed in Unionist tradition as outright treachery.)

This  weekend Latimer endorsed McGuinness’s candidacy for the Irish presidency, saying McGuinness is a man on a journey, able to bring a community attached to the gun and bomb in the direction of Democracy and peace. Given the reverend probably doesn’t have the Special Branch bodyguards the deputy first minister has, it’s to be hoped he doesn’t become the victim of some extremist Unionist gunman!

McGuiness the terrorist?
McGuinness told The Independent most people don’t care if he was in the IRA. This, unfortunately, seems to be a cack-handed  attempt at disingenuity.

McGuinness  doesn’t deny he was once in the IRA. It is claimed by British Intelligence that McGuinness was an influential member of the Provisional IRA Army Council. The Saville Report (2010) indicated it was likely McGuinness had a Thompson submachine gun at the ‘Bloody Sunday’ demonstration on 30 January 1972 but was unable to establish whether he had used it against British soldiers. He was jailed in the Republic for attempting to transport explosives across the border. It is rumoured McGuinness pulled the trigger on several executions – though no credible evidence has ever been produced.

While McGuinness undoutedly saw himself as a ‘freedom fighter’, the actions he undertook, in the eyes of the British state, were undoubtedly terrorism. Directly or indirectly, it is almost certain he is responsible for deaths – murders?

We don’t know for sure, but let’s assume he does have ‘blood on his hands’. Does that mean he hasn’t proved  a very capable deputy first minister? Does that mean he doesn’t now want a form of reconciliation and dialogue between Republicans and Unionists? Can people change?

According  to Sean Kay (2011), McGuiness told him anyone wanting to go back to violence in Northern Ireland would have to go through him.

Nelson Mandela: an example of change
It’s  instructive here to look to South Africa. Nelson Mandela, now regarded as one of the greatest statesman of the 20th Century was jailed in 1962 for conspiracy to carry out a bombing campaign in opposition to the ruling whites’ policy of Apartheid. It is rumoured that, from his prison cell, he helped organise the Church Street bombing in Pretoria on 20 May 1983 in which 19 people died and more than 200 were injured – though insufficient evidence has been produced to substantiate such claims.  However, it is unequivocal that Mandela’s then-wife Winnie endorsed the practice of ‘necklacing’ – ie: placing a tyre around a suspected collaborator and setting it alight to burn them to death. This was stated in a speech on 13 April 1986 as an explicit follow-through of Nelson’s declaration that some hideous punishment must be found for ‘traitors’, exposed during the 1962 trial.

Like McGuinness, it is likely that Mandela had ‘blood on his hands’…yet he became, with the help of Spiral Dynamics co-developer Don Beck (among others), one of the staunchest advocates of peace and reconciliation the modern world has ever seen. He is a true visionary that people around the world call for time and time again, even though his age and health problems clearly limit his potential to nothing other than the most nominal involvement.

So, if Mandela could change, why can’t McGuinness? Mandela never compromised his principle of majority rule for South Africa. But, in changed circumstances and with different voices talking to him, he found a different, more peaceful way of approaching the problem. There is no doubt that McGuinness’ objective is an ‘island of Ireland’, separate from Great Britain. But, if he’s looking at some different ways of working towards that objective than killing Unionists and British soldiers, should we forbid him from pursuing those different ways?

Understanding the milieu
McGuinness and Gerry Adams have, for some considerable time, promoted the view that there is a peaceful – though rather more prolonged – course to achieving the island of Ireland. In promoting that view, they have undermined the hard core who want to bomb and shoot their way to it. In committing themselves to democratic means, McGuinness, Adams and their like are also committed to the principle that they cannot achieve their objective until the vast majority of people in Northern Ireland also want it.

That means patience – the island of Ireland might not happen in their lifetime, if indeed ever. It also means persuasion. Adams has shown himself repeatedly to be a master of persuasion. McGuinness tends to be more straight-talking, with a tendency, in the words of the old proverb, to wear his heart on his sleeve.

That straight-talking could prove endearing if, as he appears to have done at Free Derry Corner, it leads him to an unscripted acknowledgement of the pain and misery of others, of which he is, in some small part at least, a cause. But simply dismissing his past with a bland assertion that most people don’t care about it is either crass disingenuity or a gross misunderstanding of the same PURPLE-BLUE vMEME harmonic driving the core of Unionist thinking that drives Republican thinking. As Derry priest Father Michael Canny has pointed out, McGuinness has a great deal to explain about his relationship with the IRA.

Like Mandela and his aborted bombing campaign, McGuinness has come an awful long way from the IRA gunman who toted a submachine gun on Bloody Sunday. He is one of the true architects of Northern Ireland’s fragile peace and he has been a key participant in making it work. As president of the Republic, with his knowledge of Northern Ireland politics and government, he could be an invaluable asset to the governments of both north and south in promoting greater harmony and cooperation.

To progress his campaign, though, he needs to find it within himself to reconcile his own past with the image he wishes to promote of peacemaker.

The Riots: who’s right – Cameron or Blair? Austerity and the Euro – an Appalling Lack of Quality Leadership