Home » Blog » Just how many Homosexuals are there really?

This week, in discussing Sigmund Freud’s views (1923a) on homosexuality with a class of A-Level Psychology students at Guiseley School in Leeds, the question was raised as to just how ‘normal’ gay and lesbian relationships are. When I stated that most recent surveys – ie: in the past 10 years or so – have tended to average around 2-4% of the adult population in the Western-ish world clearly identifying as gay men or lesbian – ie: verging on the statistically abnormal – I was quite taken aback by the sheer vociferousness of the class that the true number was at least 10% and, therefore, normal.

2 things struck me about this response:-

In and amongst the praise heaped on my book, Knowing Me, Knowing You, by Integral Review in 2007, I was castigated for ignoring homosexual relationships; I had 3 chapters on male-female relationships and none on same-sex relationships.

To be honest, it simply hadn’t occurred to me to include homosexual relationships. I have only come across a couple of handfuls of openly gay men, lesbians and bisexuals in my 55 years. Compared to the hundreds of heterosexual relationships I have encountered, same-sex relationships seemed so few in number they just didn’t register as a social fact I needed to write about.

Nonetheless, my RED vMEME’s pride stung by Integral Review’s criticism, I set out to discover if it was possible to find out just how many gay and lesbian relationships there might be.

What the surveys tell us
I found the following surveys carried out between 2003 and 2006:-

A CNN exit polling showed self-identified gay, lesbian, and bisexual voters at 4% of the voting population in the 2008 US presidential election.

While the surveys present quite a mixed picture, by and large the percentages of openly gay people are well below the 10% figure the Guiseley students threw at me. An average would be around the 2-3-4% mark, depending just how it was calculated (as the surveys do not all measure like for like) – and that is verging on statistically abnormal.  In a normal distribution of population – such as that shown in the graphic below for IQ – the vast bulk of the population (95%) falls within 2 standard deviations of the mean. Therefore, what is beyond 2 standard deviations is considered statistically abnormal. 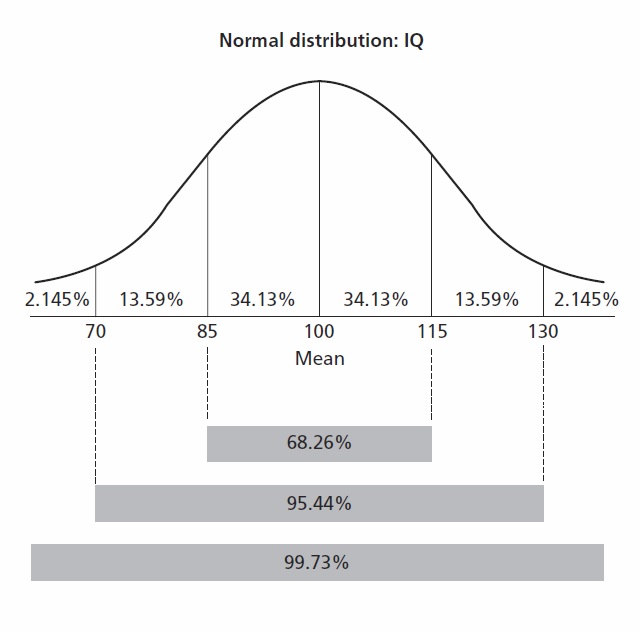 There are, of course, huge problems in collecting this kind of data, due to the large amount of prejudice & discrimination against gay men and lesbians still in many parts of the Western world. Many people who are gay undoubtedly try to conceal it to avoid being discriminated against. Thus, for reasons of social desirability bias (wanting to appear in the best light), political and social prudence, and perhaps just sheer fear, people responding to these surveys may not always have told the truth. The real number of gay men and lesbians in the samples used in these surveys is almost certainly higher than the official figures produced. The problem is we have absolutely no idea how much higher. Slightly higher or a lot higher…? We simply don’t know and we have no way of finding out. The best guestimates are just that: guesses. As most researchers into heterosexual relationships will admit, it’s incredibly difficult to get at what really goes on behind closed doors. Enter the murky underworld of homosexuality and it’s that much harder. We have Gay Pride Festivals in New York City and London; but in places like Goole it’s still very much a secretive, barely-admitted underground scene.

The best we can say is that the official responses to surveys tend to average out somewhere in the 2-4% region – statistically abnormal – but the real figure is almost certainly higher. Just how much higher we don’t know.

The meme of the 10% figure
The myth that 10% of the population are gay appears to have developed from the work of Alfred Kinsey, Wardell Pomeroy & Clyde Martin whose notorious bestseller ‘Sexual Behaviour in the Human Male’ (1948) – was the first widely read neo-scientific attempt to study sexual relationships, orientation and practices. (In 1932, 11 years before the Hierarchy of Needs construct made his name, Abraham Maslow had published an investigation into female sexuality and dominance but it was not widely read at the time.)

What Kinsey, Pomeroy & Martin actually wrote was that, of the American males surveyed, 10% were “more or less exclusively homosexual for at least three years between the ages of 16 and 55”. Whether this meant the men surveyed were homosexual as a permanent sexual orientation or had merely gone through a homosexual phase is unclear. In any case, there are serious validity problems with Kinsey et al’s sample groups. Firstly, they included an unrepresentatively-large number of prisoners and male prostitutes when set against the ratio of such persons in the general population. Secondly, his responses may have been coloured by personality bias – as they were self-selected and it can be argued it takes a certain type of personality to volunteer to talk about ’taboo’ subjects.

Whatever Kinsey, Poleroy & Martin actually intended and whatever the flaws in their studies, the 10% figure has stuck – and this demonstrates the power of memes – ideas that can spread from mind to mind like infectious viruses. No wonder a whole new psychological sub-science of Memetics has developed over the past 30 years, concerned with understanding the what and how of memetic infection. Just what kind of ideas propagate best and in what kind of circumstances. Susan Blackmore (1999) has investigated those qualities of memes which make them most likely to propagate; but Don Beck & Chris Cowan’s 1996 concept of Spiral Dynamics is even more pertinent as it links the successful propagation of different memes to which motivational systems (vMEMES) are dominant in the minds of the receptor – collective grouping or individual.

Thus, we can link the decline in influence of the BLUE vMEME in North American and Europe – particularly in terms of strict Christian teaching – over the past 40 years or so and the emergence of GREEN with its libertarian and egalitarian values. Thus, the rise of GREEN has facilitated the spread of the ‘homosexuality is OK’ meme.

Of course, with growing Muslim populations in many parts of Europe, we may well be in for a new wave of BLUE thinking that could challenge GREEN’s ‘anything-that-liberates-the-human-spirit-is-OK’ ethos. I deal with this in my concurrent post, What will Islam do for homosexuals?

So is homosexuality normal?
Statistically it might be verging on the abnormal; but is it abnormal in any other way?

Certainly it’s not an illness, as the American Psychiatric Association finally recognised in 1973 when they withdrew its entry in the Diagnostic & Statistical Manual of Mental Disorders. There is no credible evidence it is injurious to psychological well-being, provided the gay man or lesbian can accept they are what they are and they have effective strategies for dealing with the discrimination they are subjected to. There are some concerns about the sheer level of promiscuity among gay men – not only in terms of sexually transmitted infections but also potential emotional instability brought on by such behaviour. However, according to Celia Kitzinger & Adrian Coyle (1995) promiscuous gay men tend to protect themselves by being more distant with their partners.

If the evidence indicates that, by and large, it’s not psychologically harmful, why then do so many people find the mere concept of homosexuality so offensive?

The ‘it’s not natural’ argument falls down on 2 points:-

What is much more likely to be behind such a dislike for homosexuality is the PURPLE vMEME’s distinction between those it identifies with/belongs to and those who ‘are not of our tribe’.

PURPLE uses all kinds of markers for discriminating between those who are in its in-group and others who are in the out-groups. It can be race, nationality, religion, gender, etc, etc…and, of course, sexual orientation.

To go back to our example of Goole which is a largely traditional white working class inland port, with lots of social and economic deprivation. In such communities, PURPLE tends to dominate much of the culture, propagating and enforcing its memetic taboos and rituals. Undoubtedly there is something of a BLUE vMEME harmonic left over from the days when Christianity really was the religion of the land. Christianity paints homosexuality as sinful – eg: Leviticus 20:13, 1 Corinthians 6:9-10 – and this lends legitimacy to PURPLE’s categorising of homosexuals into the out-group.

Small wonder the homophobic Goole students found support in Evolutionary Psychology’s stance of sex-is-for-procreation. It’s a BEIGE level argument, about as basic as you can get…but higher up the Spiral the arguments are much more complex. Eg: the homosexuality-accepting Guiseley students are from one of the more affluent parts of Leeds, one of the most cosmopolitan cities in the UK, with substantial ethnic minorities. In that mix of money, commerce and diversity, they will be exposed to just about every vMEME – every way of thinking – there is. So it is no surprise that they may have absorbed some of GREEN’s values around sexual orientation.

In reflection, then, the argument about whether homosexuality is ‘normal’ or not is more a question of differing values held by different vMEMES. As to just what proportion of the population is homosexual, we don’t really know; but it’s probably more than 2-4%. What we shouldn’t do is unthinkingly accept memetic ‘urban myths’ like 10%.

Believing in Britain – Crisis of ‘British’ Identity What will Islam do for Homosexuals?