Home » Blog » The Dynamics of Change in an Emerging Values System

I am honoured once more to publish AlanTonkin’s work as a ‘guest blog’. Alan wrote this piece for the Global Values Network web site he runs but also thought it would be appropriate to publish it here. GVN is one of the most advanced projects in the world at using Spiral Dynamics to monitor shifts in societies and assess impacts at national, international and even global levels.

Unsurprisingly, with South Africa and Zimbabwe sharing a border, Alan takes a close interest in his country’s troubled neighbour. This highly-perceptive piece considers the flawed values mismatch in the agreement signed this week between ZANU-PF and the Movement for Democratic Change and looks at what the MDC needs to do to make the agreement work

Why Zimbabwe needs a system of shared power in transition
Following the signature of the Power Sharing Agreement between the two factions of the MDC and ZANU-PF in Harare yesterday, it is worth considering the implications of this in more detail.

There was little or no chance of ZANU-PF and the security chiefs agreeing to Robert Mugabe stepping aside.  At the same time the strength of the MDC position was that the economy was declining ever faster into the abyss and ZANU-PF required a settlement in order to survive in the short term.

This is not the first and will certainly not be the last case in Africa where some sort of power sharing initiative is required in order to move from a dictatorship to a multi-party democracy.  Although it is not generally recognised by foreign observers and the media, a ‘winner takes all approach’ is not the way to progress democratic values in Africa or in other similar developing states.

In the past the liberation movements have assumed that they have a ‘God given right’ to govern in perpetuity. However, with the emerging of a black Middle Class both in Africa and the rest of the developing world, these assumptions are now being seriously challenged.

Values shifts and the future
An emerging African Middle Class implies a better educated population as well as aspirations for a better life.  These assumptions challenge the view by African despots such as Robert Mugabe that a small but powerful elite can suppress the rights and freedoms of the broader population.  This not a racial issue but one of basic values as indicated in the South African example below. 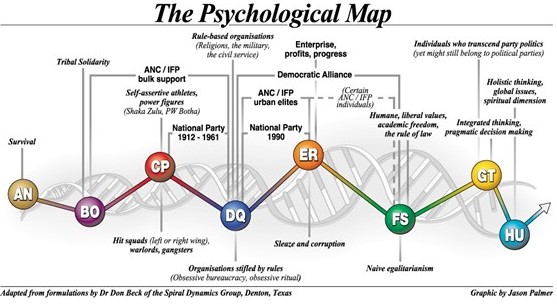 The graphic left illustrates the various stages of development as identified by Dr Don Beck in his work over the last 35 years.  The example used is that of South Africa as Dr Beck conducted much of his practical research in South Africa in the key transitional period for that country from 1982 to 1994.  Similar to South Africa the Zimbabwe situation clearly shows the differing values between ZANU-PF and the MDC.  Shown in another way the graphic below illustrates how emerging values in a  country require wide disparities in approach. 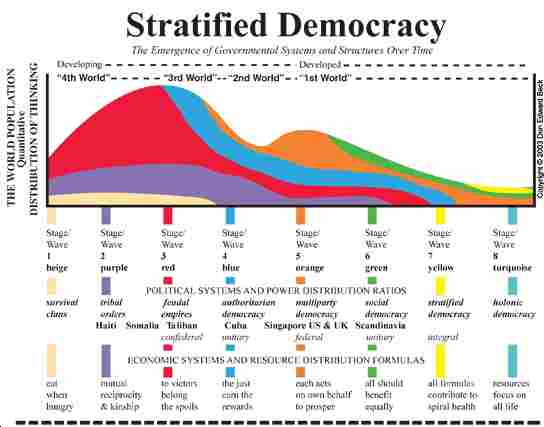 The Mugabe regime is firmly entrenched in Power RED with its support base being in the Tribal areas covering the rural peasants.  The MDC on the other hand has its power base in the urban areas with its supporters generally being better educated and more politically aware.  However, until relatively recently they were unable to find sufficient support from bodies such as the Trades Unions and professional classes.

Where to Zimbabwe?
For any power sharing to work there will need to be the necessary levels of trust and political will on both sides.  There are however, those who believe that the Mugabe regime are merely using the current power sharing agreement with the MDC as a short term stalling tactic.  In order to be successful, it is critical that the MDC are able to obtain sufficient of the key levers of power in order to be able to move the process forward.  This will provide a base on which to demonstrate to the outside world that this process can be successful.

It is only when there is demonstrable positive forward movement that Western and other donors are going to be prepared to assist with the required development funding and aid.  The opportunity exists for Zimbabweans to come together and work for a better future.  The alternative is more of the same with the real risk of a meltdown, not only in Zimbabwe but also in other states in the SADC region. 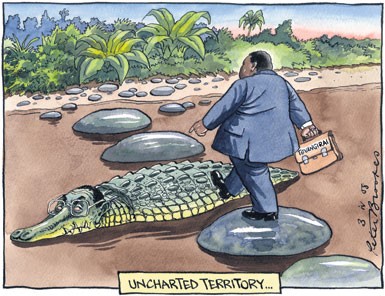 This cartoon by Peter Brookes in the Times of London earlier this year illustrates the dangers of the current situation.  We wait with interest to see if the emerging values of the ‘New Zimbabwe’ are capable of being realised for the benefit of the country and African continent as a whole.

There is however, a real danger that at some stage the Mugabe faction will revert to their original RED Power roots and attempt to go back to the original status quo.  This will require cool heads from the MDC with strong support for the new political process from SADC leaders, including President Mbeki of South Africa.

The short to medium term challenge to the MDC is to ensure that it maintains both the initiative and moral high ground in order to commence the job of restoring the Zimbabwe economy. In addition, it needs to engage with its new partners in the National Unity government in the writing of a new constitution within 18 months.  In terms of the Agreement, this should then be followed by a national referendum with new national elections following within 90 days of the release of the results.

Providing that the above goals are supported by all parties involved in the process there is absolutely no reason why a ‘New Zimbabwe’ should not resume its place in the broader community of nations. Over at the GVN Group we will be following this ongoing process closely and with great interest.

Should the Democrats have chosen Hilary? Abu Ghraib, Auschwitz and Mumbai